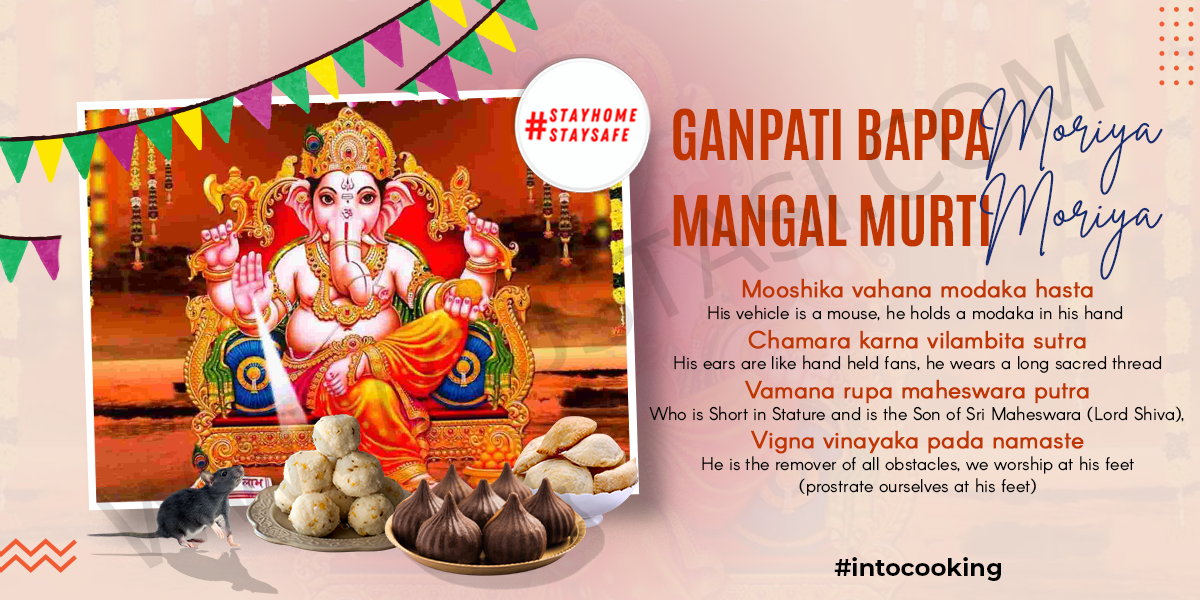 Ganesh Chaturthi, also called Vinayaka Chavithi, is an auspicious Hindu festival. Celebrated across the Indian sub-continent & across the globe by all Hindus, this day marks the birth of Lord Ganesha. Auspiciousness personified, he is considered to be the God of new beginnings. It celebrated on Chaturthi Tithi of Shukla Paksha in Bhadrapada month of the Hindu calendar which typically falls in August or September.

Ganesha is known as the God of wealth, sciences, knowledge, wisdom and prosperity, and that’s why most Hindus remember him and seek his blessings before starting any important work. Lord Ganesh is known by 108 different names like Gajanana, Vinayaka, Vighnaharta among others. His name means both “Lord of the People” (gana means the common people) and “Lord of the Ganas” (Ganesha is the chief of the ganas, the goblin hosts of Shiva). Ganesha is potbellied and generally depicted as holding in his hand Modak or Laddu, of which he is very fond. His vehicle (vahana) is the large Indian bandicoot rat, which symbolizes Ganesha’s ability to overcome anything to get what he wants. Like a rat and like an elephant, Ganesha is a remover of obstacles – the meaning of Vignaharta.

There are four main rituals which are performed during the 10-day long festival. They are namely– Pranapratishhtha, Shhodashopachara, Uttarpuja, and Ganpati Visarjan.

The Ganesha idols are installed in beautifully decorated ‘pandal’ at homes, temples or localities. The statue is also decorated with flowers, garlands and lights. A ritual called Pranapratishhtha is observed where a priest chants mantra to invoke life in the diety.

Prayers are offered to Ganesha’s idol in 16 different ways.This ritual is called Shhodashopachara.

People celebrate by singing or playing religious songs, dancing to drum beats and by lighting up fireworks– all of which add to the festive mood.

Panchakajjaya is an offering made to Lord Ganesh during this festival in parts of Karnataka. It is a mixture of desiccated coconut, roasted Bengal gram powder, sugar, ghee, and sesame. Different versions of panchakajjaya are made. Roasted Bengal gram, green gram, roasted chana dal (putani) or aval can be used.

The Uttarpuja ritual is then performed which is about bidding farewell to Ganesha with deep respect. This is followed by Ganpati Visarjan, a ceremony wherein the statue is now immersed in water. While carrying the statue to the sea and while immersing it, people generally chant in the Marathi language ‘Ganapati Bappa Morya, Purchya Varshi Laukariya’ which means ‘Goodbye Lord, please come back next year’.

This festival is celebrated with great devotion and joy by Hindus throughout the world. In India, Vinayak Chavithi is primarily celebrated at home and in public by local community groups in the central and western states of Maharashtra, Madhya Pradesh, Gujarat, Rajasthan and Goa and the southern states of Karnataka, Andhra Pradesh, Telangana, Tamil Nadu, Kerala and eastern states of West Bengal and Odisha.

Vinayaka Chavithi is a 10-day long celebration with several people bringing the Ganesha idols either at home, office spaces or local area pandals. They put in a lot of effort to decorate the space for Lord Ganesha and place offerings in front of the idol. These offerings include modak, payasam, coconut rice, motichoor laddoo, shrikhand and many other sweets. Devotees then visit temples and pandals during these 10 days to pay respect and offer prayers to Lord Ganesha. The statue of Ganesha is immersed in water on 1.5th day, 5th day and 10th day. This is known as Ganpati Visarjan. Devotees are seen chanting ‘Ganpati Bappa Morya’ paying respect to Lord Ganesha as they bid farewell t him. Traditionally this is also regarded as Ganesha taking away all our worries and leave his blessings behind.

In Pakistan, Vnayaka Vhavithi celebrations are conducted by the Shri Maharashtra Panchayat, an organisation for Maharashtrians in Karachi.

In the UK by the British Hindu population living there. Another celebration is organised by a Gujarati group. Annual celebrations are also held on the River Mersey in Liverpool.

The Philadelphia Ganesh Festival is one of the most popular celebrations in North America, and it is also celebrated in Canada (particularly in the Toronto area), Mauritius, Malaysia and Singapore. The Mauritius festival dates back to 1896,and the Mauritian government has made it a public holiday. In Malaysia and Singapore, the festival is more commonly known as Vinayagar Chaturthi because of the large Tamil-speaking Hindu minority

According to legends, Goddess Parvati made an idol of a little boy using sandalwood paste and infused life into him with her divine powers. And from the sculpture emerged a young boy who went on to address her as his mother.

Goddess Parvati was delighted to have a son, and she knew he would always be devoted to serving her. Subsequently, she asked him to watch the entrance while she took a bath.

Shiva returned home and Ganesha, who didn’t know who Shiva was, stopped him. This angered Shiva and he severed Ganesha’s head after a tiff between the two. Parvati was enraged when she came to know about this; Lord Shiva, in turn, promised to get Ganesha back to life. The devas were sent to search for a child’s head facing north but they could only find an elephant’s head. Shiva fixed the elephant’s head on the child’s body, and that how Ganesha was born.

The other popular story is that the Devas requested Shiva and Parvati to create Ganesha so that he can be a Vighnakarta (creator of obstacles) for rakshasas (demons), thus being a Vighnaharta (averter of obstacles) and helping Devas.

On the day of Ganesh Chaturthi, devotees are advised not to see the Moon. It is believed that one who sees the moon on Ganesh Chaturthi creates Mithya Dosham or Mithya Kalank, which means false accusation of stealing something.

Modaka are sweet dumplings, the traditional offerings and prasada in Ganesh Chaturthi.

The primary sweet dish during the festival is Modak (modak in Marathi and Konkani, modakam or kudumu in Telugu, modaka or kadubu in Kannada, kozhakatta or modakkam in Malayalam and kozhukattai or modagam in Tamil). A modak is a dumpling made from rice or wheat flour, stuffed with grated coconut, [jaggery], dried fruits and other condiments and steamed or fried. Another popular sweet dish is the karanji (karjikai in Kannada), similar to modak in composition and taste but in a semicircular shape. This sweet meal is called Nevri in Goa and is synonymous with Ganesh festival amongst the Goans and the Konkani diaspora.

In Andhra Pradesh and Telangana modak, laddu, vundrallu (steamed, coarsely ground rice-flour balls), panakam (a jaggery-, black pepper- and cardamom-flavoured drink), vadapappu (soaked moong lentils) and chalividi (a cooked rice flour and jaggery mixture) are offered to Ganesh. These offerings are known as naivedya, and a plate of modak traditionally holds 21 pieces of the sweet. In Goa, modak and a Goan version of idli (sanna) is popular.

Panchakajjaya is an offering made to Lord Ganesh during this festival in parts of Karnataka. It is a mixture of desiccated coconut, roasted Bengal gram powder, sugar, ghee, and sesame. Different versions of panchakajjaya are made. Roasted Bengal gram, green gram, roasted chana dal (putani) or aval can be used.